Rochelle Humes' baby daughter projectile vomited all over her face, much to The Saturdays' singer's surprise and shock. 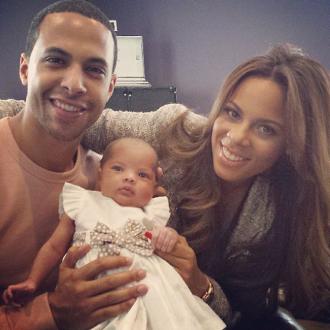 Rochelle Humes was left grossed out after her baby was sick on her face.

The Saturdays singer was incredulous when her three-month-old tot Alaia-Mai - who she has with her husband, JLS star Marvin Humes - projectile vomited all over her face with no prior warning, forcing her to change her sick-stained outfit.

She posted on Twitter: ''Alaia-Mai was just sick on my face..wow... second time I have got dressed today lol / Bless her ❤ for Mumma lol x / Her timing is always unbelievable LOL xx (sic)''

The 24-year-old star hasn't been having much luck today (20.08.13). She announced she had broken her phone and lost all her contacts just one hour before the baby's barfing incident.

She wrote: ''Friends. I broke my phone and lost everryyy number!! If you have mine please can you text me yours xx (sic)''

Rochelle and Marvin - who have landed a role guest hosting breakfast show 'This Morning' - have been enjoying parenthood so far and recently revealed Alaia-Mai was a well behaved baby.

The 'All Fired Up' singer gushed: ''It's going well, she only wakes up once in the night so great so far ... We've been living in a bubble.

''She's amazing. I don't know who she's more like, she looks like my baby pictures but everyone says me and Marvin look similar anyway - she looks like his brother actually!''