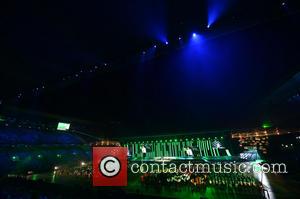 Scottish stars Rod Stewart and Susan Boyle welcomed The Queen and the 2014 Commonwealth Games to Glasgow on Wednesday (23Jul14).

Boyle sang Wings hit Mull of Kintyre as the monarch entered Celtic Park during the opening ceremony, while Stewart wore a silver suit as he performed his hit Rhythm Of My Heart.

The big event was opened by actors John Barrowman and Karen Dunbar, who hit the stage with a song written specially for the Games.

Singer/songwriter Amy MacDonald was also among the opening ceremony stars and Stewart returned to the stage to close the big gig with Can't Stop Me Now, just before The Queen declared the Games open.

Reports suggest Kylie Minogue will perform at the closing ceremony on 3 August (14).