After taking steroids throughout the late 1980s to help with his vocal chords, Rod Stewart has revealed that his penis shrunk - although his wife doesn't mind all that much. 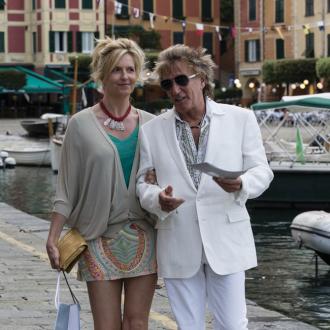 Penny Lancaster, the wife of rock legend Rod Stewart, has chosen to describe his manhood as ''pretty, but not large.'' Stewart, 68, recently revealed that his penis shrunk due to a steroid addiction in the late 1980s. He has also revealed that his 42-year-old wife doesn't mind the size, as the couple have fun in the bedroom often enough. Stewart explained that: ''My wife says it's pretty, but not large. But we do it two to three times a week. When you've got two small kids like us we have got to fit it in between the children.''

Stewart and Lancaster have two sons together - Alistair and Aiden - and Stewart has gone on to reveal that he was due to make a plaster cast of his member, but decided against it in the 1970s when he saw how big Jimi Hendrix's mould was. He told the story to 'The Daily Star', saying that: ''I remember it like it was yesterday. When I saw Jimi's I pulled my trousers back on and left sheepishly.''

Stewart, a member of the 'Rock and Roll Hall of Fame', has had eight children with five women over the course of his life. He admitted that his steroid use was put down to the way it soothed his vocal chords before gigs, although they were the main cause of his size reduction. He explained the addiction by saying that: ''I let myself down on tours in the late 80s when I was addicted to steroids. In those days we didn't have in-ear monitors and the band kept getting louder and drunker, and I kept blowing my voice out.

He further explained the usage, saying: 'The steroids will take down the swelling in any membrane - including your knob - and it's what you do when you're in a bit of a pinch and need to do a show and you can't sing.''