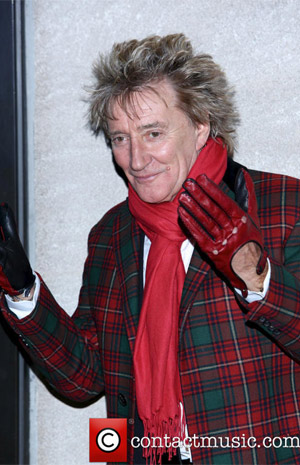 Rod Stewart has completed his first album of new material in almost 20 years.  The landmark new album, titled 'Time', marks Stewart's long-awaited return to his songwriting roots and features 12 tracks, 11 of which he wrote and produced. 'Time' will be released May 6th on Decca Records and will be available for worldwide pre-order beginning today.

In anticipation, Decca Records released an exclusive video featuring portions of seven original songs set to montage never-before-seen videos filmed throughout the making of the album.

During an early preview of seven tracks, Billboard proclaimed, 'Stewart rocks again.' 'Lushly produced with an abundance of tempo and an overall guitar-based core sound, his inimitable warm vocals sound as strong as ever.'

Stewart's first single, 'It's Over', will be available to download everywhere from today.

'Time' is a landmark release in Stewart's career, born from a burst of inspiration from which he rediscovered his voice as a songwriter and rekindled his gift for writing honest narratives that have been the cornerstone to the first three decades of his career. Since 1991, Stewart, the lyricist and melodist behind such staples as 'Tonight's The Night,' 'You Wear It Well,' 'You're In My Heart,' 'The Killing of Georgie' and the indelible 'Maggie May,' had simply lost his songwriting muse.

But beginning in 2011, during the period he began working on what would become his internationally best-selling autobiography, Rod, it returned.

Said Stewart, 'Something about that process of reviewing my life for the book reconnected me and that was it: I was away. Suddenly ideas for lyrics were piling up in my head.  Next thing I knew, I had a song called 'It's Over' about divorce and separation. And now I was getting up in the middle of the night and scrambling for a pen to write things down, which has never happened to me. I finished seven or eight songs very quickly and I still wasn't done and it became apparent that I would eventually have a whole album of material to record, which had never happened before.'

Rod Stewart is a two-time inductee into the Rock and Roll Hall of Fame, a Grammy Living Legend®, and in 2007 he was bestowed the prestigious CBE. He has released 27 studio albums and garnered an estimated 150 million in album sales worldwide.  Later this year, Stewart is scheduled to kick off his Live The Life tour in Europe beginning June 1st at Nottingham's Capital FM Arena.