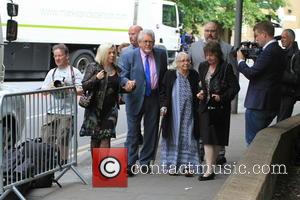 Veteran entertainer Rolf Harris staged a brief performance for a court jury in London on Tuesday (26May14), breaking into song and playing his trademark 'wobble board'.

The Australian Tv personality and artist is on trial at Southwark Crown Court, south London, accused of sex assaults on four females, who were aged between seven and 19, between 1968 and 1986.

He took to the witness box on Tuesday to begin his defence, and when he was asked to outline his background in music to the court, Harris demonstrated his didgeridoo and wobble board instruments before singing an excerpt of his 1965 single Jake the Peg.