By 1971, The Rolling Stones had topped the UK single charts (it was still relevant back then) no less than eight times and, after the Beatles' split in 1970, they stood unchallenged at the forefront of popular British music. For so long the two bands had traded the number one spot like Frazier and Ali would trade punches at Madison Square Garden later that year, challenging the very fabric of society. When they left Britain later in '71, they jetted from the French Riviera to California to Jamaica to New York, free to record wherever took their fancy. 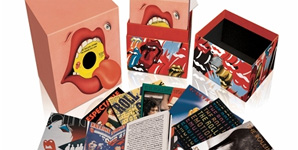 The Rolling Stones, perhaps more so than any other band, have always understood the importance of the single release format, appreciative of the weight that is needed to back every 45 punch. Released both as a physical and digital set, The Rolling Stones Singles (1971-2006) collates the incredible run of forty-five 45's that the band have produced over those four decades.

The set comes in a lovely pink box complete with the band's trademark tongue design. Each of the 45 cds are styled on the original 7" 'house-sleeves,' containing a total of 173 tracks; 80 of which are not officially available anywhere else. The box also houses the customary book of photos as well as an interview with Bill Wyman and an essay by journalist Paul Sexton.

Working your way through the rolling groove of 'Tumbling Dice,' the driving funk of 'Start Me Up', the striking rawness of 'Angie', or the irresistible jive of 'Brown Sugar'; the Stones have never been afraid to move the goal posts or indeed the whole pitch when writing their material. Now picking up their pensions, in their heyday and for a long time afterwards, the band arguably invented rock 'n' roll culture as we know it. The fact that Keith Richards' autobiography was sent back by the publishers for being "too real" says more than any anecdote that could be relayed here.

There is a downside to this collection; some of the remixes spawned in the 90's and 00's fall at almost every hurdle. For example, the inclusion of Will.I.Am's remix of 'Rain Fall Down' is as exciting as a mixtape of Margaret Thatcher's speeches. Armand Van Helden version of 'Anybody Seen My Baby' also offers nothing, but thankfully the 6 remixes are only fraction of the whole package, with the band's live versions proving a much more valuable contribution.

As ever with these special-limited-never-seen-the-like-of-before-editions, they are aimed at the collector or the obsessed, rather than your average dabbler. For the fanatic The Singles is a treasure trove, for the mildly interested there is 2005's Forty Licks compilation. Either way, you'll be doing your best Jagger impression bouncing, pouting and shaking around the living room.

How does it feel / To be on your own
With no direction home / Like a complete unknown
Just like a rolling stone ?