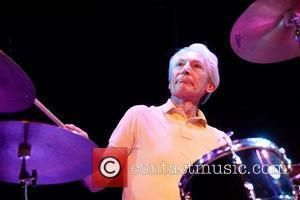 The Rolling Stones are considering staging a massive London spectacular to mark the band's 50th anniversary next year (12), according to guitarist Ronnie Wood.
Plans for a 2011 reunion appear to have fallen flat as frontman Mick Jagger launches his supergroup SuperHeavy and Keith Richards breaks ground on a planned solo album, but Wood, who recently reformed The Faces without Rod Stewart, is hopeful the Stones will be back in 2012.
He tells London's Evening Standard there are plans afoot to stage a series of gigs in Hyde Park.
He says, "We'll try to recapture the old camaraderie... I know Keith is fully supportive, as are the rest of the boys in the Stones. We'll see what we can do as a unit. Playing Hyde Park would be fabulous."
The group played a fabled gig in Hyde Park in 1969 - their first following the death of Brian Jones.
The Stones last played London in August 2007.