Adam Fogelson hobnobbed with Ron Howard, unaware that he was about to get fired. 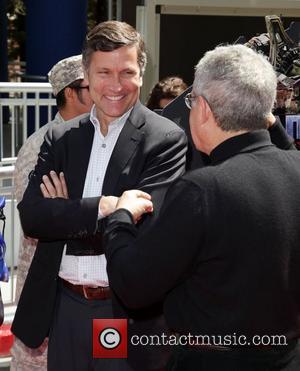 Poor old Adam Fogelson. The guy had flown on Universal's company plane with Ron Meyer and Donna Langley to attend the Toronto premiere of Ron Howard's Formula 1 movie, Rush, on Sunday night (September 8, 2013) though unbeknownst to him, he didn't even have a job anymore.

According to the Hollywood Reporter, Fogelson was completely unaware that a major shake-up at the company was underway and was completed blind-sided by his firing. Jeff Shell was named chairman of Universal Filmed Entertainment, with Langley and Meyer promoted to studio chairman and vice chairman of NBC Universal, respectively.

CEO Steve Burke fired Fogelson Monday after news broke that Shell would take over. A meeting between the men had previously been scheduled and reports suggest Burke didn't intend to blindside Fogelson.

The emotional studio boss spoke to employees at Universal after getting the news, saying he was shocked and didn't understand. "Now I'm going to have more time to take my kids to school," he said. "I'll be OK."

Over the weekend, Meyer, Langley and Fogelson stood shoulder to shoulder as they chatted with director Howard and the stars of the new movie. The three executives returned to California together early on Monday morning, which is when Fogelson was given the chop. "This is unbelievable," said one veteran studio executive as the news filtered through Toronto, where Fogelson had been a visible presence, notably at the premiere of Dallas Buyers Club, "Shell is a television and business guy."

Essentially, veteran Shell will oversee worldwide operations for Universal, including its global theatrical and home entertainment businesses. Langley will oversee all feature film production, as well as Focus Features - home of the forthcoming Fifty Shades of Grey project, with Charlie Hunnam and Dakota Johnson.

"In Ron, Jeff and Donna, we have three of the most talented business and creative executives in the industry," Burke said in a statement. "I have no doubt their collective strengths will help us continue to maintain our momentum and drive value at the studio."