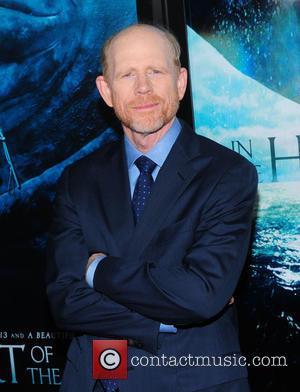 The director's future wife appeared in Howard's first film when they were in high school together and the short western was such a hit, Ron decided to cast her again and again.

Then his career behind the camera took off and the Apollo 13 filmmaker started getting superstitious, and insisted Cheryl and his brother Clint appeared in his films.

"She's not an actress and she doesn't even particularly like doing it," Ron tells U.S. actor and broadcaster Dan Patrick. "We met in high school and the first movie that I was making... was a short film and I was gonna enter it in the Kodak Teenage Filmmakers contest...

"She came and all she had to do was stand off to the side and kinda wink, while these two had this goofy showdown."

The film came in second place, which was a huge thrill for Ron and fuelled his passion for making films.

"That felt pretty lucky, and we kept dating - that was going great," he adds. "I always need people to fill in, y'know cheap extras... and she would always do it, and suddenly my career started to take off and I became superstitious about it."

Cheryl has credits in 14 of her husband's films, from the student Old Paint in 1969, when she was Cheryl Alley, to 2009's Angels & Demons, but she also pops up in other films as an extra.

"Sometimes she has a line of dialogue, sometimes not, but if you know who you are looking for, you can always find Cheryl Howard," her husband explains.