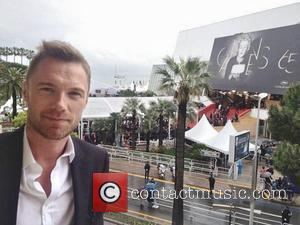 Picture: Ronan Keating posted this photo on Twitter with the caption: It's still raining in Cannes. But amazing buzz here Cannes, France - 21.05.12 Supplied by...

Ronan Keating, of course most famously known as front man of Irish boy group Boyzone as well as being a sometime solo performer himself, has taken a bold step in making a turn for the movies, and the fruits of his labour are being put on show at this year's prestigious Cannes Festival - currently taking place.
Keating stars in the upcoming film 'Goddess' alongside Laura Michelle Kelly and admitted that his biggest was fear was trying to balance both his film and musical aspirations. "I'm finishing an album at the moment that will come out in August," he said, according to The Press Association, "I hope I can do the two in tandem, I would like to think so. It just needs someone to believe in me again like Mark believed in me. It's a risk taking someone who's a musician and putting them into a film."
The film's plot sees Keating play a scientist who is away whilst his wife stays at home looking after their family. Bored, she installs a webcam and starts singing songs about her life, only to become an internet sensation and having to choose between fame and fortune or losing it all. Keating admitted that it had been fun to do, claiming "It was a very different experience. I've made a load of music videos but dealing with dialogue and with other people, and reacting to them and things they say to you, it's a whole other minefield."