Ronan Keating Has Been 'Good Boy' On Tour

Ronan Keating has revealed he has been behaving on tour after it was revealed last year he had been having an affair with a Boyzone backing dancer. 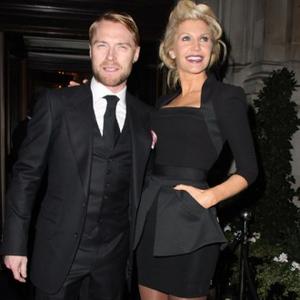 Ronan Keating has been a "good boy" on tour.

The Boyzone singer - who temporarily split from his wife Yvonne after it emerged he'd been having a seven-month affair with 26-year-old backing dancer Francine Cornell last year - says his marriage is back on track and he has given up partying while on the road.

He explained: "I've been a good boy on this tour. I've been going to bed early.

"It hasn't been a party tour but I've really enjoyed it. For me it's been tough emotionally and physically."

Ronan, 34, surrounded himself with family on his latest tour, with Yvonne and their three children, Jack, 12, Marie, 10, and five-year-old Ali, joining him as often as possible.

He said in an interview with the Daily Star newspaper: "My family have been to nearly every weekend show as the kids have been in school during the week. Yvonne came over for my birthday (03.03.11) and Jack came on stage in Dublin for his 12th birthday (15.03.11). It's been a family tour. All the lads' kids and wives have been around so it's been a nice vibe.

One person missing from the Boyzone camp however is Stephen Gately - who died from a heart condition in 2009 - and Ronan admitted it has taken the group, which also includes Mikey Graham, Shane Lynch and Keith Duffy, some time to come to terms with their loss.

He said: "We were all in very weird head spaces. Everybody just ran. We were running scared."