First Comes Love, then Comes Marriage, then Comes Baby in a Baby Carriage! Ronnie Wood and Sally Humphreys To Start A Family! 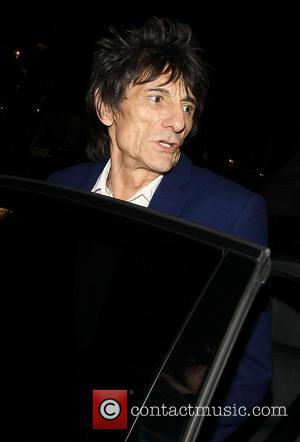 65-year-old rocker, Ronnie Wood, tied the knot with his theatre producer partner, Sally, on Friday in a penthouse suite at London's Dorchester hotel, and now the pair are intent on starting a family of their own.

"Sally has always wanted to have children and thinks Ronnie will be a great dad to them now he's settled down," the insider told the Sunday People. "They have enjoyed being by themselves and have a real laugh but a baby is something they both really want in the near future." Sally has confirmed that she would like to have children with The Rolling Stones legend, but wants to wait a while before they take the plunge into parenthood (in this marriage, anyway). "I would like children but not yet. Ronnie is relaxed about it but I just want to have some time just as ourselves," Sally said last month according to the Daily Mail. Ronnie - who is already father to four children from previous relationships - had been in a relationship with Humphreys for six months before tying the knot last week.

The pair have been friends for years, but it took a while for things to fall into place. "Ronnie was married and then Ronnie wasn't married. I have had boyfriends, then I didn't have a boyfriend. It had to wait until everyone was clear. But I definitely feel like I have ended up in the right place."