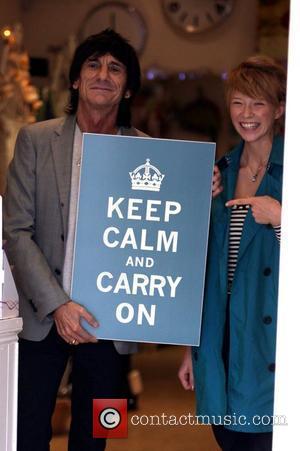 Picture: Ronnie Wood and Ekaterina Ivanova go shopping for Ronnie's newly purchased flat only hours after rumours have circulated that the pair are dating again London,...

Ronnie Wood's girlfriend EKATERINA IVANOVA is refusing to press charges against the Rolling Stones rocker after he was arrested on suspicion of assaulting her, according to reports.
The 62-year-old guitarist was held by police on Wednesday (02Dec09) after allegedly choking Ivanova during a 30-minute heated argument outside a restaurant in Surrey, England.
Reports claim the star was drunk as he furiously pushed and shoved his Russian lover in the street - but the 20 year old doesn't want to file a complaint against Wood, according to Britain's The Sun.
A police source tells the publication, "Ekaterina was very distressed and had cuts on her knees from where it seems she'd been dragged along the street. But she was insistent she didn't want police involved or to press charges.
"Despite her refusal, witnesses allege this was a potentially serious assault and he may face charges in any case once the evidence is assessed. We're looking at allegations that at one point he had her by the scruff of the neck and her collar was so tight she seemed to be choking."
Ivanova's mother Irina, who lives in London, claims her daughter is recovering well after the altercation, insisting, "My daughter's doing fine. She is a good girl and a brave girl."
Wood was released from police custody on Thursday (03Dec09) after posting bail.
He split from longterm wife Jo in July last year (08) after his fling with the waitress was exposed.