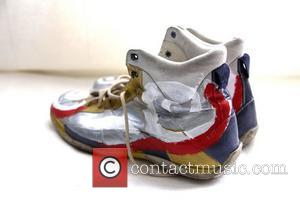 Ronnie Wood has been angered by his ex-wife Jo Wood, who is planning an auction of art and memorabilia, which is described as a ‘joint sale.’ According to Reuters, Ronnie is claiming that he is part-owner of some of the items that are due to go on sale and he’s also pretty mad that the auction has been billed as a joint sale, when he specifically said he didn’t want to be involved. The auction is scheduled to be held at Julien’s Auctions in Beverly Hills on October 27, 2012 so the Rolling Stones guitarist and his ex don’t have very long to clear the matter up.

From Ronnie’s statement, Reuters learned “Ronnie was asked by Jo some time ago if he wished to add some items to an auction and he said he did not want to participate. He is therefore shocked and disappointed that this auction is being misrepresented as a joint sale. This is not the case." However, Jo’s own spokesperson said that the former model is the owner of the items, as per the terms of their divorce. “This is Jo's auction, it includes all the items left to her following the divorce,” said the spokesperson during a telephone call. “She's had everything in storage for three years and can't keep it any longer. Ronnie has been kept in the loop of the sale.”

Ronnie may have been in the loop but he sure as hell isn’t happy about it. And he insists that some of the items are his personal possessions such as his tour clothes, which should not have passed to Jo in the divorce. “Ronnie feels saddened that Jo has taken this course of action and wants the public to know he has NOT teamed up with Jo on this outrageous sale,” the statement confirmed. The auction house told Reuters that the sale is still on: “It is their (Ronnie and Jo's) collection and it is part of their divorce settlement.” Sounds as though someone’s got their wires crossed somewhere along the line.