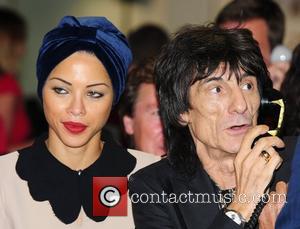 Picture: Ronnie Wood and Ana Araujo, on the trading floor of BGC Partners' Charity Day which is held each year to commemorate the company’s 658...

Rolling Stones rocker Ronnie Wood has told of his delight after raising "a few billion" dollars for charity on the trading floor on Monday (12Sep11).
The guitarist volunteered to man the phones alongside British royal Prince Harry, supermodel Eva Herzigova and singer Duffy at the offices of Bgc Partners at London's Stock Exchange as part of the annual Bgc Charity Day.
Wood was thrilled after completing a number of deals with clients, telling Britain's Daily Express, "I can't keep up with billions - it's fantastic. I've raised a few billion today."
But it was Prince Harry who closed the biggest deal of all - the 26 year old brokered a record-breaking foreign exchange deal worth £15.5 billion.
Bosses at Bgc, formerly known as Cantor Fitzgerald, host the annual fundraiser to commemorate victims of the 9/11 attacks in New York. The company lost 658 employees at its offices in the World Trade Center during the atrocity.