Ronnie Wood's son wants him to 'pay up'

Ronnie Wood needs to ''pay up'' to his four children, according to his eldest son, Jamie. 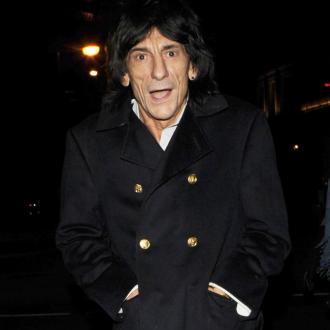 Ronnie Wood needs to ''pay up'' according to his son.

The 65-year-old Rolling Stones guitarist has been accused of neglecting his four grown up children - son Jesse with his first wife Krissy Findlay, and son Tyrone, daughter Leah and stepson Jamie with his second wife Jo Wood - since he left her four years ago.

Jamie - who has always treated Ronnie as his father, even though he is not biologically - told the Daily Mail newspaper: ''A normal parent will push their children to achieve great things. You give them the tools to go out and get a job and earn a living. But in rock star families that doesn't happen - not just in my family, but in any rock 'n' roll family.

''We were sent to school and that was about it. No one ever pushed any of us to succeed in life. If you are not going to do that for your kids when they are younger, well, then you should get the chequebook out.''

Speaking of his siblings, the 38-year-old gallery owner added: ''You can't just leave them in the lurch now because they are not prepared. The rock star needs to pay up.''

Further adding to the Jamie's upset is how Ronnie is set to earn a huge payout when The Rolling Stones perform four concerts to celebrate their 50th anniversary before the end of the year, as well as his father announcing this week he is to wed 34-year-old theatre director Sally Humphreys.

Jamie also admits the recent move to auction off a number of Ronnie's possessions left at the house he shared with Jo, 57, when he left her in 2008 was his idea.

He said: ''Blame me. We needed to get rid of all of Dad's s**t which we've had in a warehouse for three years. My mum would have given it all to Oxfam.

''But I've got three kids and a mortgage to pay and I thought: 'They're Dad's trousers, people will pay good money for them.'

''So I spoke to a friend who runs an auction house in America.''

Despite his upset over financial matters, Jamie insists he is happy about his father's impending wedding, adding: ''Dad's getting old. He needs someone to look after him and love him. Some 21-year-old blonde is not the answer, Sally obviously is and I think she's good for him.''