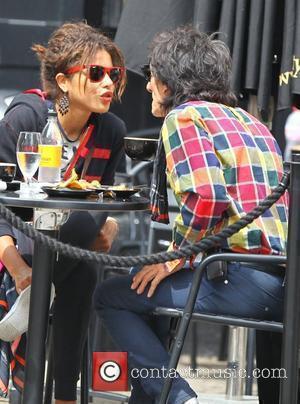 Ronnie Wood has laughed off reports he has been dropped from THE Rolling Stones line-up, amid his battle with booze.
The guitarist has been dogged by rumours his role in the rock supergroup is in jeopardy because of his alcohol abuse issues, and fans were left stunned when the band's official website listed Wood as a member from 1976-2010.
The site editors have since altered the piece and now Wood's status in the band reads "1976-present".
Now the rocker has spoken out to confirm he has not left the Stones, despite working on the reunion of The Faces and battling his booze demons.
He tells Britain's Daily Mail, "The Stones are great about The Faces. They are encouraging. In the downtime between The Stones' activity, you might as well do something constructive and keep the chops going."
Earlier this week (beg24May10) The Rolling Stones' drummer Charlie Watts was also rumoured to be leaving the group, but the band's representative has since issued a denial, saying, "We would like to make it clear that drummer Charlie Watts has not left The Rolling Stones."