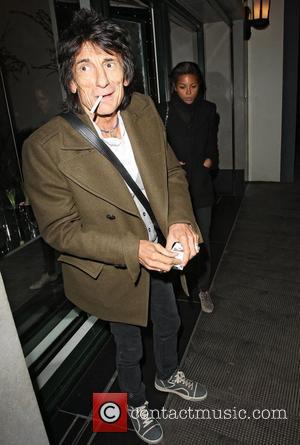 Rocker Ronnie Wood has separated from his Brazilian girlfriend and is trying to reconcile with his ex-wife Jo Wood, according to a U.K. report.
The Rolling Stones musician started dating polo coach Ana Araujo last year (10) following his split from 21-year-old mistress Ekaterina Ivanova - the woman he dumped Jo for.
Wood's divorce from Jo, who he wed in 1985, was finalised last month (Jan11), but he is now reportedly seeking a reconciliation with her after separating from Araujo.
A source tells Britain's Daily Mail, "Ronnie and Ana have been having troubles - and the likelihood is they'll call it quits officially in the next few days. They had a wonderful time in South America at Christmas, but since they got back Ronnie has had a complete change of heart. It's as if he has tired of Ana.
"Ronnie saw Jo this week and they had a heart-to-heart. He told her he still loves her and she is the love of his life. He realises that he has made a mistake. It's a typical Ronnie thing to do. Jo is only just getting her life back on track, so it's all very difficult for her - but of course, she still loves him, he's the father of her children, she will always have feelings for him."