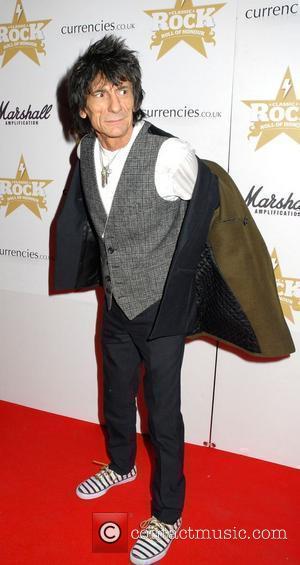 Rocker Ronnie Wood is eyeing a slot at next year's (11) U.K. music festival Glastonbury - he wants the Rolling Stones to reunite on stage for the first time in three years at the iconic event.
The veteran rockers have stepped away from the spotlight since they completed their 144-date A Bigger Bang trek in 2007, which remains the highest-grossing concert tour of all time, while their album of the same name was released in 2005.
Rumours of a Rolling Stones resurgence have been rife recently, and last month (Nov10) guitarist Keith Richards confirmed the musicians are about to start recording new music together.
Now Wood has spoken out, insisting it's "high time" they regrouped onstage, and revealed he'd love to headline Britain's biggest festival next summer (11) to mark the reunion.
He tells Britain's Metro, "I'd love to do it (Glastonbury). I'm always up for the festivals. As far as the Stones are concerned we haven't had a get-together for three years but it's high time."