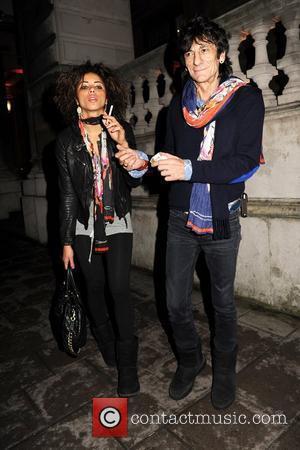 Picture: Ronnie Wood and Ana Araujo seen on a night out together in Mayfair London, England - 18.03.10

Rocker Ronnie Wood's latest relationship is in trouble - he was reportedly attacked by his new Brazilian lover after a drunken bust-up.
The Rolling Stone's bassist left his wife of 23 years, Jo, in 2008 after embarking on an affair with Russian cocktail waitress Ekaterina Ivanova.
He moved out of the family residence to set up home with Ivanova, but their relationship ended after he was cautioned by police for assaulting the 21 year old in a street in Surrey, England, in December (09).
Wood quickly moved on to Brazilian polo coach Ana Araujo earlier this year (10), but the star's hard-boozing ways have caused friction between the pair.
According to Britain's The Sun newspaper, 30-year-old Araujo lashed out at Wood after she caught him drinking heavily behind her back, and left the star with a black eye and a bloodied lip following an altercation at his Surrey home on Wednesday (24Mar10).
A source tells the publication, "Ana had been keeping him off the bottle. She rumbled him on Wednesday having a drink and an argument escalated quickly. He was calling her all sorts of names for criticising his drinking and she snapped. He crossed the wrong woman."
Reporters at the newspaper claim Wood called ex-wife Jo following the fight, but she was unsympathetic.
An insider adds, "She's (Jo) sick of his nonsense and told him to get a grip. He's a sad old man."