Electronic maestro Room E, a producer from San Diego, USA, releases full length studio album entitled Penguin Child through label Kudos Records. It's an ambient, chilling sound that Room E seems to have gone for with this album. Not a bad thing, although maybe slightly overdone. 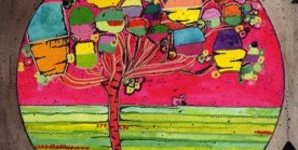 There are some strong points on this album - as electronica goes, it definitely ticks all the boxes. It's uplifting and obviously talented. The use of live drums also seems to set it apart slightly from other electronica, making it sound more 'bandy' than other electronic releases. There is also a pervading sense of it being completely saturated in effects that 'twinkle' their way through the album, again, setting it apart from other electronica that uses mainly synth riffs to create songs, rather than a mixture of effects all put together to create sound. It's a different approach and it appears to have been a bit of a success.

Limitations - some vocals wouldn't go amiss to break the monotony of the music, which can get quite 'samey' as the album progresses. It's also, despite its differences, still electronica that's been done before. Talented, yes, but not wholly original. Maybe that's not the point; maybe it's not meant to be completely original and groundbreaking. It is, however, still rather good.

So, overall, nothing special, but yet, importantly, it's nothing terrible. The music is good, excellent to put on in the background when a listener is busy with something else or it's particularly good when put on in the car on a long drive. It could be improved with a little more originality, but it definitely shows much promise.