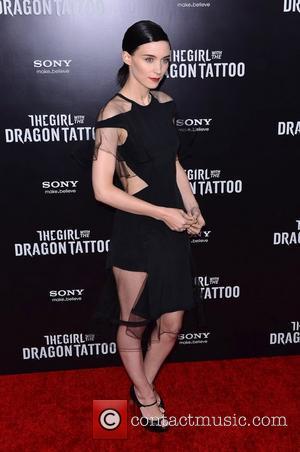 Rooney Mara is the undoubted star of David Fincher's remake of 'The Girl with the Dragon Tattoo', so much so, that she had seen her odds of winning Best Actress at the 2012 Academy Awards slashed to just 9/1.
The undoubted favorites for that award are Meryl Streep and Viola Davis, though win or lose, Mara has cemented herself as one of the hottest young actresses in Hollywood. She plays gothic computer hacker Lisbeth Salander in the American reboot of 'Dragon Tattoo' and is already winning plaudits for her gritty and precocious performance. Just last week, clothing retailer H&M launched a range inspired by Mara's character - who favors studs, leather jackets and piercings to jeans, heels and accessories. The movie, based on the first of Stieg Larsson's literary blockbusters The Millennium Trilogy, follows the story of journalist Mikael Blomkvist, played by Daniel Craig, and his search for a woman who has been missing for over forty years. Though the British actor is being praised for a career best performance, Rooney is taking all the plaudits, with CNN's Mark Rabinowitz saying, "When it comes down to it, this is Rooney Mara's movie, and I don't care if the second and third stories are any good as long as they are full of Lisbeth Salander".
Mara, who reportedly fended off competition from Scarlett Johansson and Oscar-winner Natalie Portman to land the role of Lisbeth, was previously known for her appearances in teen flick Youth in Revolt and Fincher's 2010 effort 'The Social Network'.