The Austin-based movie 'Song To Song' is more authentic than you realise.

It's always exciting when a film brings a real musical flavour into the mix and the effort filmmaker Terrence Malick has gone through to effect that on his latest project 'Song To Song' is singular. Even the people in Rooney Mara's band are real rock stars.

Rooney Mara plays with Black Lips in 'Song To Song'

Their role in the film is as Rooney Mara's character Faye's band, and the actress actually got up on stage with a guitar to perform with them when they were shooting the movie at Austin City Limits in 2012. 'That was not a normal Black Lips show with Rooney up there jamming with us', frontman Cole Alexander admitted. 'But we like to cause a shocking scene sometimes.'

Watch the featurette for 'Song To Song' here:


Malick wanted a very authentic atmosphere for his movie, which follows the complicated love quadrangle between two budding songwriters named Faye and BV (Ryan Gosling), a musical mogul named Cook (Michael Fassbender) and a waitress named Rhonda (Natalie Portman) on their journey towards success, which informed his decision to use real artists and real music fans.

More: Watch the trailer for 'Song To Song'

'It was so brave of Rooney', says Natalie. 'Up on the real stage playing for these real crowds, and to see that, I mean, it's just so, so, so incredible. It's real! And to have that in front of a real audience, it brings a different kind of energy I think than these concert scenes you see where everything's like extras and cast and stuff; it feels much more vibrant and alive.' 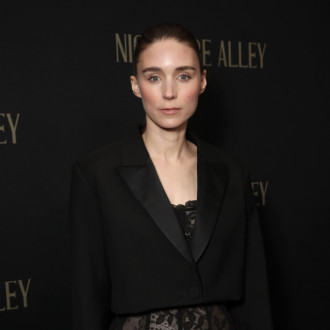 Rooney Mara to star as Audrey Hepburn in biopic