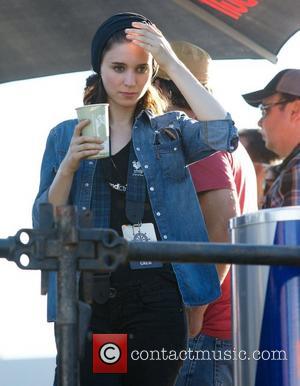 Actress Rooney Mara is a nervous wreck whenever she steps on the red carpet to promote her movies, insisting attending high-profile events is a living "nightmare".

Mara, who became a big star when she signed on as filmmaker David Fincher's leading lady in the Hollywood remake of The Girl with the Dragon Tattoo, admits she is painfully shy and struggles when she's the centre of attention.

She tells Vogue magazine, "(Walking the red carpet is) a nightmare! It's a panic attack waiting to happen. I don't even like people to sing Happy Birthday to me.

"When we wrap a film and everyone claps and cheers, I turn red. And then I have to walk out onto the middle of this carpet and there are all these photographers, and they're all screaming at you. And usually there's a party at the other end of it, so it's not even like I have solace at the end of the carpet! It's like then I have to walk into my other nightmare!"

Mara also despises the amount of preparation that goes into choosing an outfit for big premieres and prizegivings because she never signed up to be a model when she decided to become an actress.

She says, "It's kind of an annoying part of the job - because I'm not a model, and I don't want to be. I didn't try to be a style icon. I'm just not that interested in that world. But it does matter, and either I can fight that or I just have to accept that it is a part of my job, and I may as well wear things that I like and that represent me."

Mara will have to face her fears head-on again in May (13) when she serves as co-host of the Metropolitan Museum of Art's annual Costume Institute Gala in New York.