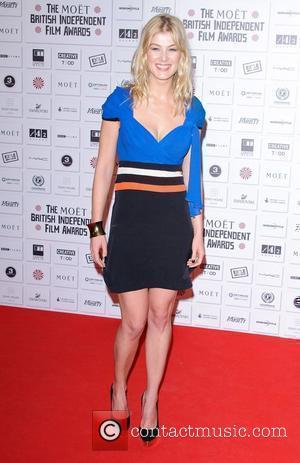 Rosamund Pike has taken aim at BAFTA bosses for overlooking U.K. films in favour of their American counterparts, insisting it's a "real shame" her MADE IN DAGENHAM co-star Sally Hawkins was snubbed in this year's (11) nominations.
The shortlist for the annual British Academy of Film and Television Arts (BAFTA) prizegiving was announced on Tuesday (18Jan11) and apart from Colin Firth's movie The King's Speech, most of the films and actors who received nods hailed from the U.S.
Pike has been left downhearted by the BAFTA committee's choices, insisting American films prove more popular with voters as they get to watch the movies before they are released in Britain.
She tells the BBC, "Those are the ones they watch over Christmas. People who are voting get their film screeners and everyone is so excited to see all the American movies that haven't come out here yet."
And the former Bond girl is shocked Hawkins, who led the film about women seeking equal pay in a 1960s British factory, has not been nominated for a Best Actress honour.
She adds, "It's a real shame. Sally was the heart and soul of that film and I thought she did a phenomenal job.
"With some films getting 14 nominations, four is not such an impressive number."
Made In Dagenham received nods for Best Supporting Actress for Miranda Richardson, Outstanding British Film, as well as nominations in the wardrobe and make-up categories. The awards will take place next month (13Feb11).