Rosamund Pike was often annoyed by her 'Barney's Version' co-star Dustin Hoffman, but was too in awe of his legendary status to reprimand him for his irritating behaviour. 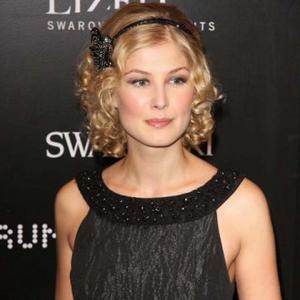 The 31-year-old actress - who appears alongside the Hollywood legend in 'Barney's Version' - found the star's playful attitude irritating, as she would find it hard to concentrate when he was around.

She explained: "We only had one important scene together, and he was so annoying!

"Paul Giamatti and I were having our wedding day, and we were doing our big kiss, and Dustin would be like, 'C'mon, that's not a kiss. Ooh, now Paul, that's more like it! Ah-ha, now she's kissing you back Big Time! Giving you a stiffie, is it?' All this stuff."

However, the 'An Education' star confessed she was too scared to reprimand the actor because of his legendary status.

Rosamund added: "He's completely un-shy. He'll say things like, 'Rosamund, which part of your body do you like least?' just before you do a take. And if it was anyone else you'd say, 'Oh f**k off', but it's Dustin Hoffman, and you realise that he's suddenly got you to wear a mournful face when it's supposed to be the happiest day of your life.

"You sort of marvel at how he got you into this different place."