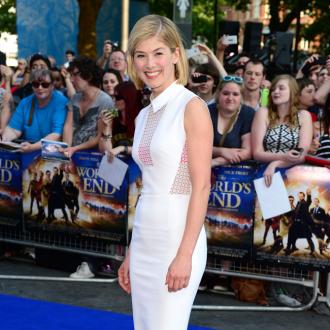 Rosamund Pike has landed the female lead in 'Gone Girl'.

The British actress will play Amy Dunne - a woman who goes missing on the morning of her fifth wedding anniversary - in the big screen adaptation of Gillian Flynn's best-selling thriller novel.

The Hollywood Reporter has confirmed Pike's casting after it was rumoured last week the 'The World's End' beauty was producers' first choice to star opposite Ben Affleck in the highly-anticipated film.

The 'Argo' filmmaker is playing Nick, Amy's husband, whose world is rocked when all roads seemingly point to convict him as his wife's killer.

'The Girl with the Dragon Tattoo' helmer David Fincher is directing from the screenplay which Flynn has penned herself and Reese Witherspoon is co-producing via her Type A Films production company.

Neil Patrick Harris and Tyler Perry are in the running for supporting roles.

Meanwhile, Charlize Theron and Chloe Grace Moretz are said to be attached to yet another adaptation of Flynn's novels, 'Dark Places'.

Theron - who will also produce the film - will play Libby Day, who accused her brother of killing their family as a child, only to be forced to relive the past and solve the mystery of what really happened 25 years later.