Rose McGowan accepts her Twitter post revealing the sexism actresses have to put up with in Hollywood ''didn't do much for her career'' but she's proud she revealed it to the world. 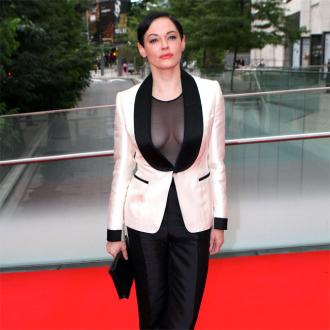 Rose McGowan is proud of herself for deciding to reveal the inherent sexism in Hollywood but accepts her choice ''didn't do much for her career''.

The 42-year-old star took to Twitter to post a casting note that was sent to her with a script for an Adam Sandler film which asked all actresses attend their auditions wearing ''a dark form fitting tank that shows off cleavage and form fitting leggings or jeans''.

Although she was praised for her post, Rose was subsequently fired by her agent and accepts her stance has had a long-term effect on her work opportunities but she has no regrets.

Speaking to the new issue of Prestige Hong Kong magazine, she said: ''Ah, the tweet heard around the world! I think it was good, though it didn't do much for my career. The day after I was walking out of the Lincoln Center screening of 'Dawn', which should have been a high point of my career until I got an email that my agency was firing me! By this point I thought I may as well be a spokesperson for women - if no one else is doing it I might as well be one.''

Rose considers herself a committed feminist but gets angry when she is described as ''anti-men'' for her beliefs.

The 'Machete' actress insists she just wants equality for women all over the world and certainly doesn't hate men.

She explained: ''Some people have called me anti-men, but why does wanting equality have anything to do with hating men? It's a reductive way to think. In terms of things I want to achieve, there's a lot happening. I want to launch guidelines for Hollywood to follow and I'd like to get DC involved in this. There's so much criminal activity in Hollywood that needs to stop. It's like the police policing themselves - it's not gonna work. I also want to use my films as a platform to give people a voice.''