Review of Home Album by Rudimental

When Pop excels it can be a joyous, uplifting, exciting and sometimes sublime experience. It can suspend reality, change moods, transport you to another place, engage your imagination and ignite all manner of emotions. When Pop produces such an effective sound as to make it irresistible to even its greatest detractors, it can be a wonderful, uniting leveller that is without prejudice or boundary; it truly is a universal language that everyone can enjoy. In the recent past much has been made of the artificial and manufactured nature of the Pop end of the music spectrum, but there are still notable exceptions (Cee Lo Green/OutKast/Daft Punk/Calvin Harris/will.i.am etc) that continue to show just how good it can be. 'Home', the debut album from Rudimental, is such a product; it is the pinnacle of Pop. It is 'Baby One More Time', it is 'Hey Ya', it is 'Crazy' - it is that good. 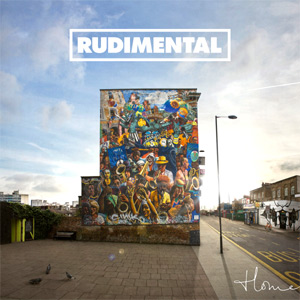 Rudimental, the four piece from Hackney, may pitch themselves as Drum 'n' Bass but their music is too infectious, too positive and too exhilarating to just be pigeon holed there. As their success of the last twelve months has been testament to them, they have defied genre categorisation to bring their life affirming sound to a wider audience. The two John Newman tracks, 'Feel The Love' and 'Not Giving In' in particular are brilliant packages of superb, succinct Pop delivering on any level you care to analyse. The near gospel, deeply soulful delivery complimented by an understated organ, choral backing vocal, reverse beats and a deliciously sub-tropical, seductive horn section really deliver a fantastic result. Newman's voice is perfectly suited to carry each song; it is as impressive as it is impassioned. The super-sonic velocity of the breakbeat score injects a substantial shot of adrenalin into both tracks instantly drawing you into the heady and intoxicating mix.

'Home' is not just about a couple of brilliant tracks though, it is an album of variety with few flaws. The title track, and album opener, is full of depth with its super charged bass and sultry layered vocals. It's like Paloma Faith with a twist of Morcheeba thrown in for good measure. 'Spoons', the first single taken from the album, released February 2012 and featuring MNEK and Syron, is pure, smooth R 'n' B with a silky female vocal lead and an almost James Blake like production. The arrangement and the mix, which have fabulous looping beats, are as chic as they come; a great clubbing entre or late night radio essential. (This cut was possibly a little too subtle to chart but never the less it's a great track).

Rudimental make the most of today's sought after and emerging talent on the album. 'Right Here' features Foxes in another of the album's accelerated highs. The beats are relentless and the bass gets as warped as dynamic time with the odd keyboard flourish, driving rhythms and precisely accentuated vocals. Sinead Harnett puts in a couple of memorable performances on the slow pulsating, brass enhanced 'Hide' and also on the rather funkier dueted (MNEK again) dance floor fluidity of 'Baby'.

The biggest selling artist of 2012, Emeli Sande, also features twice on this album. 'More Than Anything' sees Emeli at her emotive best, owning every word and belting out her soul as the beats build and break below in this tragic plea. The finale, 'Free', initially strips it back for Emeli as she goes a little Tracy Chapman: "If you ask the church then I am no believer, Spend Sundays asleep I am just another dreamer", but with a far more upbeat and contemporary feel complete with a brilliant dripping bass-line. If that isn't quite enough there is also the band's latest single 'Waiting All Night' with Ella Eyre on vocal duty. The high hats skip along at hyper speed as the brass section adds impetus to the soaring and scintillating score. Ella's vocal is full of power and passion and the whole track just makes you wanna bounce!

Piers Agget, Kesi Dryden, Amir Amor and DJ Locksmith, Rudimental, have pulled off a sensational and spectacular achievement with 'Home'. It is likely to be the best Pop record you hear this year and is more than worthy of all the plaudits it receives. The music is so energised and enthusiastic that it can't fail but to transfer its attitude and positivity through to the listener. I just loved it; the beats, the breaks, the dirty bass, the vocals, the production and arrangement - the whole thing. Go get yourself some and put a smile on your face.