Run The Jewels have been one of the most essential and thrilling hip-hop groups of the last few years. Consisting of Killer Mike and EL-P, two highly respected rappers for their solo efforts, the duo formed after EL-P produced Mike's visceral 'R.A.P.Music' and have since put three damn fine albums to their name, the latest being this year's 'Run The Jewels 3.' With the freshest of glimmering beats that can be just as in-your-face as they can be nuanced, an array of themes whether they be political or humorous and of course, Mike and EL-P's telepathic chemistry and knot tight, lightning fast flow; they're constantly gripping and it's no wonder they're so beloved. They hit Manchester tonight to play a sold-out Albert Hall, where they nearly destroy the place. Not much of a calm before the storm with The Gaslamp Killer though, who is everything you want in a DJ. Whether he's playing Childish Gambino or Slayer, Death Grips or Pakistani music, 8-Bit or 'The Imperial March'; whether he's scratching or using wavepads, he's bound to hype you. It also helps that he's so tuned to what he's playing, he's constantly bouncing, yelling along and doing machine gun motions in perfect timing to every beat.

Run The Jewels are an absolute whirlwind from start to finish. Being armed with some of the most burley hip-hop tunes of recent years, it takes seconds for the crowd to explode into a riot. Whether it be the scattering beats, the vigorous bars or the witty lyrics, people are bound to get rowdy to something about Run The Jewels' sound and rowdy is well and truly the only way to describe tonight's atmosphere. Something like the stomping bass of 'Blockbuster Night Part 1' will have people slamming into each other, whilst the rolling clicks of 'Hey Kids (Bumaye)' has everyone pumping fists and jumping to the front. You could even feel the floor wobble at times. Albert Hall is an old building and its wooden floor isn't much of a match for hundreds and hundreds of people bouncing on it.

Even between songs people are giddy, either chanting 'RTJ' and/or holding up their hands to form the Run The Jewels, gun-hand-robbing-the-chain, logo. When a band have been as consistently exciting as Run The Jewels, they're bound to get this level of appreciation from fans. That excitement extends to how Run The Jewels are onstage, with Mike and EL-P constantly bouncing around stage, acknowledging people in the balcony who seem to know every word and always having something funny to say.

There's a point in the show where EL-P is joking that he's going to give up rapping to become a poet (though he played it with a level of conviction, to make you worry), as he can't 'live in Killer Mike's shadow much longer.' As his spoken word, he quotes the opening line from 'Panther Like A Panther', which alone causes a giant pit to open up at the side of the room, which of course becomes a warzone once the actual song kicks in, with its jittering beats spurring people on. This is the show in a nutshell, people going absolutely berserk but there being the jolliest feel to it in how much of a joy Run The Jewels are to watch.

Even in the very last songs people are hyper like the gig has just started, the way Run The Jewels' self-titled song ignites further moshing with its beebop swing and 'Close Your Eyes (And Count To F*ck' has people jumping higher than any other song in the night to the 'Running jewels fast' refrain.

Despite the fact that Run The Jewels are so current and vital to now, watching them feels like watching legends, the amount of command they have as well as the level of euphoria they inspire. It's easy to forget however, that these guys have been legends with amount they'd already contributed prior to this band, because Run The Jewels feels like their crowning achievement. If tonight's anything to go by, this outfit is what these guys will be most remembered for, but even more so, Run The Jewels will be remembered as one of hip-hop's greats. 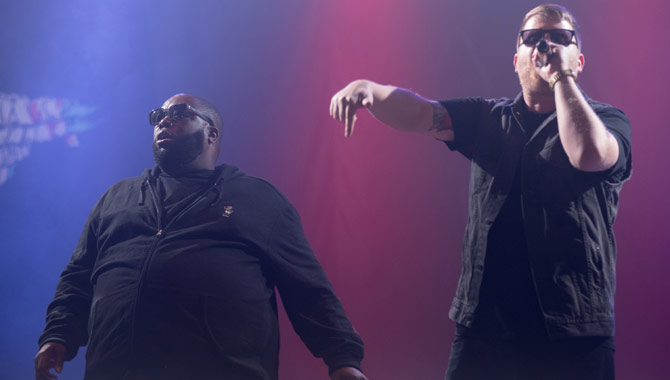