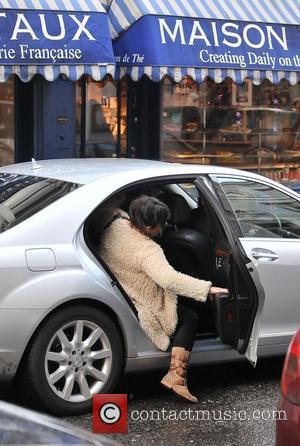 Picture: Russell Brand stops to collect a friend from an address in central London. The pair then headed back to his hotel. London, England - 03.01.12

Rumors continue to swirl that Russell Brand and his wife Katy Perry decided against signing a pre-nuptial agreement before their shock separation last week. The British comedian filed for divorce after just 14 months of marriage, with attention now turning to the potentially huge settlement involved, reports E! Online.During an interview with the New York Magazine last year, Brand spoke of his love for the Fireworks singer before their wedding day, revealing, "I want to make our wedding just about me and her loving each other and we're getting married in front of our friends and family and keeping it normal, so it ain't selling the pictures, ain't doing no prenup" (sic). The couple's wedding in India was shrouded in secrecy and Russell stuck to his word and refused to sell the photographs. With this in mind, it is likely that the pair also steered clear of a pre-nuptial agreement - which could prove hugely costly for Perry in particular. Though the comedian has a strong following in the UK and U.S, his wife's popularity and wealth is on another level and she is reportedly worth over $40 million. Californian law states that without a pre-nuptial agreement, the pair must split their wealth and assets 50/50. Forbes magazine's Dororthy Pomerantz notes, "The vast majority of her money is coming from touring.She's also really smart, she makes a ton of money from her endorsements and she's even launched a perfume line [called Purr] and that's all a great source of money too, but most of her money comes from being on tour". In terms of Russell's wealth, Pomerantz explains, "If you look in the last year.his biggest film was Arthur, he's got books and other performances.I would give a generous estimate that he made between $6 million to $8 million the past year, which is a drop in the bucket".
As for assets, the Hollywood couple reportedly have a $6.5 million mansion together in Los Angeles. The divorce is likely to echo that of Mel Gibson's from wife Robyn