Russell Brand slammed Hugo Boss, sponsors of the GQ Awards, for being ''Nazis'' after accepting his award for Oracle of the Year. 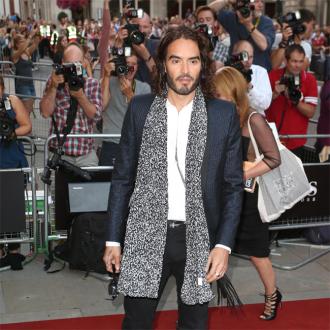 Russell Brand hit out at the GQ Awards sponsors Hugo Boss claiming the company's founder was a ''Nazi''.

The 38-year-old star picked up the Oracle of the Year award at the ceremony at the Royal Opera House in central London last night (03.09.13), but he referred to the history of sponsors Hugo Boss - who formally apologised in 2011 for their maltreatment of 140 Polish and 40 French workers - and they founder, who became a member of the National Socialist Party in Germany in 1931 and supplied uniforms to the Sturmabteilung, Schutzstaffel, Hitler Youth, National Socialist Motor Corps, and other party organisations

Russell also made light of his accolade and made a jibe at his friend Noel Gallagher, who was sharing a table with him.

He said: ''Oracle? That's got to be a made up award so I would turn up. It was also a great source of news when I was growing up, alongside Teletext.

''I would like to thank that pixelated news source and say to Noel, good luck being more offensive than that son!''

Rob Brydon also caused controversy at the ceremony by joking Stephen Fry - who is bipolar and attempted to commit suicide last year - cannot be ''left alone with vodka and pills''.

But Michael Douglas - who has separated from wife Catherine Zeta-Jones - was the big winner of the night, picking up the Legend award, which was presented by Samuel L. Jackson.

He told the audience his year had ''been something'' and acknowledged his accolade, saying it was ''a polite way of saying this is my third act''.

Former 'Downton Abbey' star Dan Stevens picked up the Most Stylish prize, while Pharrell Williams won the Performer accolade and Noel Gallagher, who criticised British Foreign Secretary William Hague for attending the event with ''all the s**t going on around the world you should be sorting out'', won the Icon award.