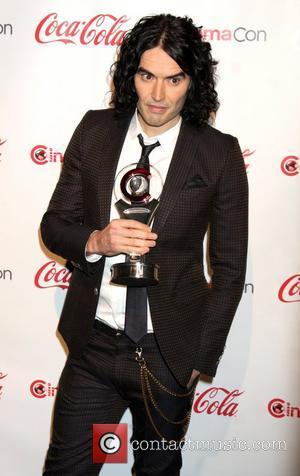 Russell Brand, Jim Carrey, Jack Black, Snoop Dogg, Heidi Klum and Josh Duhamel went green at the Nickelodeon Kids' Choice Awards on Saturday (02Apr11) - they got slimed.
Host Black, Klum, Carrey, Snoop Dogg and the night's Arm Fart Hall of Fame inductee Duhamel, who dressed up as Justin Bieber for his sliming, were all prepared for the messy 'honour' but Brand was caught out when he stepped onstage to present the award for Favorite Voice from an Animated Movie to birthday boy Eddie Murphy.
Favorite Movie Actor Johnny Depp opened the proceedings by squirting the audience with a slime canon and setting off fountains of goo that covered the first few rows at the Galen Center in Los Angeles - and the fans hurled globs of the green stuff back onstage as Brand walked on.
Trying to laugh off getting splattered with the green stuff, Brand said, "This is not in the script. You are all going to juvenile hall. You children are going to prison; you are bad children. Johnny, I wish you'd drowned them."
Host Jack Black opened the show with an impressive dance routine on the orange carpet and then became part of the Black Eyed Peas for a colourful musical performance. The Peas picked up the Favourite Music Group prize.
Carrey closed the show by pretending to float into the event in a balloon - and ended up getting slimed. He then sprayed goo all over Black.
The full list of winners at the Nickelodeon Kids' Choice Awards is:
Favorite Female Singer - Katy Perry
Favorite Male Singer - Justin Bieber
Favorite Song - Baby by Justin Bieber
Favorite Movie - The Karate Kid
Favorite Animated Movie - Despicable Me
Favorite Reality Show - American Idol
Favorite TV Actress - Selena Gomez
Favorite TV Actor - Dylan Sprouse
Favorite Book - Diary of a Wimpy Kid series
Favorite Cartoon - Spongebob Squarepants
Favorite Male Athlete - Shaquille O'Neal
Favorite Female Athlete - Lindsey Vonn
Favorite Video Game - Just Dance 2
Favorite Movie Actor - Johnny Depp
Favorite Movie Actress - Miley Cyrus
Favorite Voice from an Animated Movie - Eddie Murphy (Shrek Forever After)
Favorite Music Group - Black Eyed Peas
Favorite TV Show - iCarly
Big Help Award - Justin Timberlake