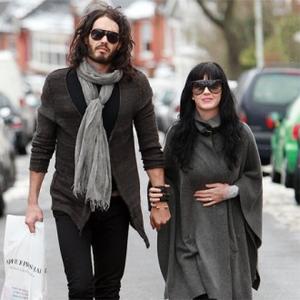 A source told the New York Post newspaper: "They were holding hands and looking very much in love. At the wine and cheese hour, Russell was telling jokes and Katy was laughing.

"They seemed pretty giddy, and despite being in the wine country, neither was drinking."

The San Ysidro ranch is an upmarket resort built on the former home of Franciscan monks, and is favoured by many A-list stars including actress Gwyneth Paltrow and her Coldplay rocker husband Chris Martin, and Hollywood stars Sandra Bullock and Julia Roberts.

Despite being in one of California's most famous wine regions, the reason neither star was drinking is most likely because Russell - a reformed drug addict - gave up alcohol after attending rehab in 2003.

Although his bachelor party, held in September, saw him visit a London lap dancing club with friends, it was a sober affair.