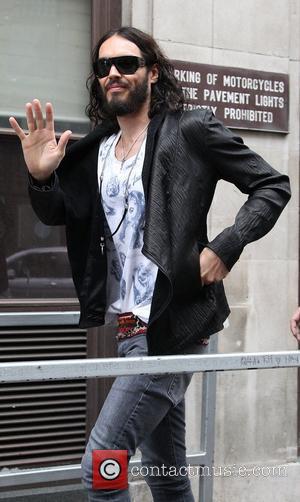 Funnyman Russell Brand flew into a rage during a U.K. TV interview after he was quizzed about his split from Katy Perry.
The British comedian was promoting his new movie musical Rock Of Ages on The Graham Norton Show when the Irish host asked him about his failed marriage.
Brand looked into the audience at his mum Barbara in the front row, then turned to Norton and accused him of making her tear up.
He ranted, "My mum is here. She got upset when you dragged up my marriage. I saw her cry, Graham. That's the reality because it's real people, Graham, that's my real mum. I have come here to promote a film and you made my mum cry. I don't see you as that sort of person Graham."
Norton insisted, "I don't see myself as that kind of person," and explained that it would have seemed "weird" not to ask about Perry as she had been a guest on the show last week (07Jun12).
Brand retaliated, "Will people sit and think, 'Oh, that's odd.' What I would have done, mate, in your position is come up to me before the show and gone, 'Listen, it's a bit odd that your ex-missus was on last week. I might mention it, is that OK?' But in all of the chatting and the research backstage, no one mentioned it."
When Brand finally chatted about his failed union, he said, "Some human beings get married and hopefully it works out for them and maybe it won't. If people get divorced, maybe that is a sad thing."
The heated exchange was edited from the episode when it aired on Friday (15Jun12).