Tom Cruise aand Katie Holmes' daughter Suri Cruise was scared of Russell Brand when she met him on the 'Rock of Ages' set. 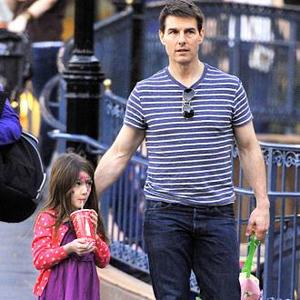 Suri Cruise was scared of Russell Brand the first time she saw him.

The daughter of 'Rock of Ages' star Tom Cruise and actress Katie Holmes was apparently petrified of his long legs.

He told the Daily Star: ''Suri came to visit me on the film set in Miami. The first time she saw Russell striding over towards her she burst out crying - literally burst out crying on the spot. She was terrified of him.''

He explained: ''She isn't used to being around people who are so tall. I mean the man has freakishly long limbs!''

However the 49-year-old then revealed his six-year-old daughter now loves Russell, 37, because he made her laugh by ''pulling faces and talking funny''.

A fellow partygoer told the publication: ''Tom said he seriously hopes Russell has a child of his own in the future because he'll make an awesome father one day.

''Russell laughed and shook his head, but he looked quite touched by the remark.''

He recently said his most enjoyable part of the film was when he ''got to snog Alec Baldwin on the gob''.