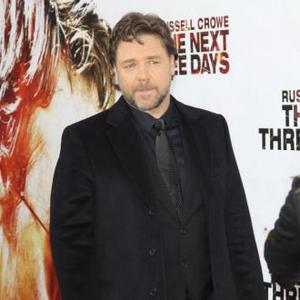 Russell Crowe is confirmed to play the lead role in 'Noah'.

Director Darren Aronofsky is delighted that the 48-year-old actor has joined the cast of the drama movie, and the 'Black Swan' helmer is looking forward to being ''wowed'' by the New Zealand-born star's ''immense talent'' on set every day.

He said in a statement: ''I'd like to thank Paramount and Regency for backing my team's work to breathe new life into the biblical epic.

''I rejoice that Russell Crowe will be by my side on this adventure. It's his immense talent that helps me to sleep at night. I look forward to being wowed by him every day.''

Darren, Ari Handel and 'Gladiator' screenwriter John Logan have all had a hand in penning The Script for the movie, which is a close adaptation of the biblical story of Noah's Ark.

The tale sees Noah given a mission to build an ark to save the world from a devastating forthcoming flood.

Liam Neeson has been linked with the project, which will see Ari, Arnon Milchan and Chris Brigham all executive produce.

'Noah' is due to begin filming in July in Iceland and New York, and the motion picture is expected to be released on March 28, 2014.