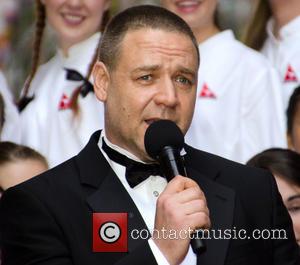 We could hardly bring ourselves to visit Russell Crowe's Twitter page when first hearing that he'd responded to Adam Lambert's criticism of Les Miserables. We assumed the boisterous Australian would take apart the former American Idol star inch-by-inch, so imagine our surprise when the actor appeared to agree with Lambert.

The singer had initially taken to Twitter after seeing the film, telling his two million followers, "Les Mis: Visually impressive w great Emotional performances. But the score suffered massively with great actors PRETENDING to be singers." In fact, his thoughts on the movie mirrored those of the critics, who gave the film generally positive reviews, though nothing out of the ordinary. Lambert added, "I do think it was cool they were singing live - but with that cast, they should have studio recorded and sweetened the vocals.The industry will say 'these actors were so brave to attempt singing this score live' but why not cast actors who could actually sound good?" Hugh Jackman and Amanda Seyfried have singing experience, though the likes of Crowe and Anne Hathaway were effectively debuting their singing voices for the first time. Crowe, who plays Javert in the epic based on Victor Hugo's novel, tweeted in response, "I don't disagree with Adam. Sure it could have been sweetened, Tom Hooper wanted it raw and real, that's how it is." MASSIVE anti-climax.