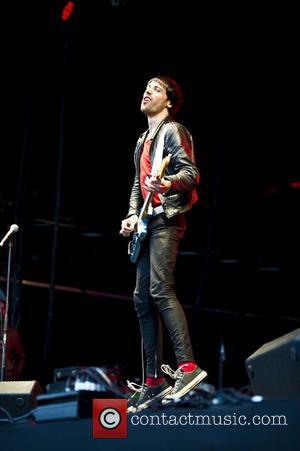 Picture: Ryan Jarman of The Cribs performing at Get Loaded In The Park at Clapham Common London, England - 12.06.11

British rocker Ryan Jarman was determined to remain dignified as his band The Cribs were honoured at the NME Awards in London on Wednesday (27Feb13) after landing in hospital following the same event in 2006.

The band was presented with the Outstanding Contribution trophy at the annual prizegiving, and Jarman was adamant that he would keep his cool at the event, which came seven years after he threw himself on a table of wine glasses and needed stitches.

Speaking to Britain's The Sun newspaper before the show, he said, "Last time we won I ended up in hospital, so I didn't even get to keep the award.

"This time I'm just gonna (sic) accept it with grace. It's up to someone else to do something controversial now.

"I've done my bit - maybe that was my Outstanding Contribution to Music."