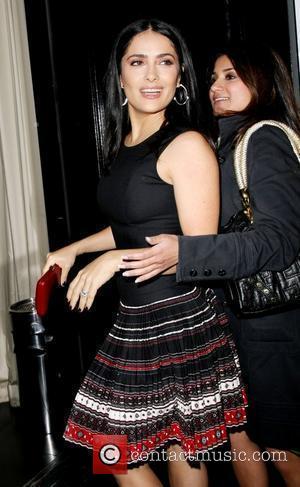 Salma Hayek celebrated her Italian nuptials to Francois-henri Pinault by joining actor pals Charlize Theron and Woody Harrelson for a special collaboration with rocker Bono at her weekend (25Apr09) wedding reception.
The Frida star renewed her vows to French mogul Pinault in a star-studded event in Venice weeks after becoming husband and wife in a small ceremony in Paris, France on St. Valentine's Day (14Feb09).
Theron, Harrelson, Penelope Cruz, Ashley Judd, Antonio Banderas, and Hayek's ex-boyfriend Edward Norton were among the 150 guests who attended the event at Venice's La Fenice opera house on Saturday evening.
And the party turned into one big sing-a-long when the celebrities took hold of the microphone to belt out their favourite hits, reports People.com.
The bride sang Stand By Me with U2 frontman Bono, Harrelson, and Theron, while the Monster actress joined designer Stella MCCartney for a rendition of Don't Cry For Me Argentina. Hayek later came together with the pair to cover the Rolling Stones' hit (I Can't Get No) Satisfaction.
But Hayek wasn't the only one providing the entertainment - she and Pinault were treated to a Hawaiian-style version of Over the Rainbow from The Wizard of Oz by all their guests.