Salma Hayek's Young Daughter Came To The Rescue With An Ingenious Tip As The Actress Struggled To Eat Her Way Through A Fake Heart On The Set Of Her New Film Tale Of Tales. 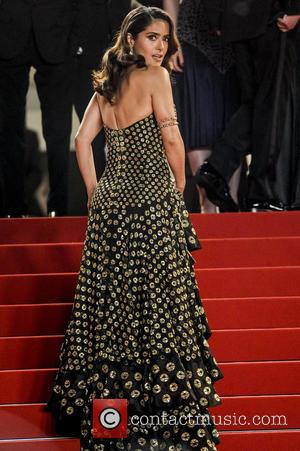 The Mexican beauty plays a queen in the fairytale epic, and in one startling scene she had to feast on a bloody sea monster's heart on a silver platter - and it didn't taste good, as per director Matteo Garrone's request.

Discussing the scene with reporters at the Cannes Film Festival on Thursday (14May15), Hayek said, "We have to talk about this. It's disgusting. Our director here wanted the inside of the heart to be identical to a real heart. God forbid I took a bite and the doctor would recognise that it’s an artery... There was pasta, candy, all kinds of disgusting things (inside of it). I thought I was going to throw up."

The nasty concoction left such an awful taste in Hayek's mouth, she feared she wouldn't be able to continue - but her seven-year-old daughter Valentina came to her mum's rescue.

Hayek continued, "Thankfully my daughter, Valentina, was there and she saw the monitor and came up after the third time I started gagging and she said to me, 'If you bite from the front (of the heart) you can go to the back of it and spit it out. You cannot see it in the camera. I am looking at the monitor... She saved my life."