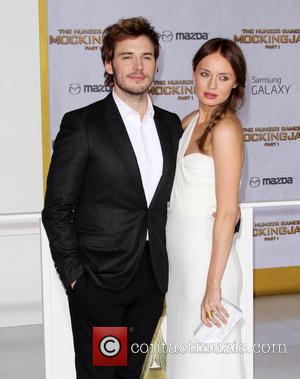 Actor Sam Claflin was convinced his wife Laura Haddock was "out of his league" when he fell for her at first sight at an audition in 2011.

The Hunger Games star was instantly struck by how beautiful the actress was, and experienced heartache when he learned she was not single. But destiny brought them together twice in 24 hours.

He explains, "It was love at first sight. We met in an audition room and I walked in and was somewhat blown away by her beauty. I remember leaving the audition and calling my agent like, 'I have just met the woman I want to marry'.

"She was totally out of my league, there was no way I was getting her and he basically confessed that he represented her as well and I was like, 'Is she single?' and he said, 'No...'

Another chance meeting with Haddock later that day made Claflin feel sure he was supposed to be with her.

He continues, "That evening I went out, partied with a few friends, stayed up all night, got the first tube (train) home in the morning, got to my station, the doors opened and there she was alas at 5.30am. So I was like, 'Hi, I look awful, still wearing the same clothes as I met you in yesterday'. It was fate."