"I've practically eaten it," the 47-year-old filmmaker told Red magazine's March issue. "I have read it over and over."

One of the most difficult aspects for Taylor-Johnson was keeping her creative direction. "I want to protect my vision and that's the hardest thing," she said. "There are so many voices. You have to try and keep all those people at bay. You think, you hired me because I'm a creative artist with a vision. Don't try and knock it out of me."

However, maintaining control over the production was anything but easy. "I'm literally going out of my mind," she continued. "I have seen this film over a thousand times and I'm now in a blancmange. But the nuances within-the tiniest shift, look, blink of an eye-can make all the difference and flip it into the wrong territory. It's like walking a knife edge."

But not all was bad! Luckily for Taylor-Johnson the film's stars, Jamie Dornan and Dakota Johnson, were a pleasure to work with, and she didn't hesitate when it came to compliment the duo to the magazine.

More: Why Jamie Dornan Is Fearing For His Life At 'Fifty Shades of Grey' Premiere

"Dakota is fantastic," Taylor-Johnson gushed. "She has that rare knit of fragility, vulnerability, naivety, yet she's really strong. And Jamie's funny because he doesn't seem to feel any of the pressure. Or show he feels it. Everything washes over him and he's constantly happy. He's such a sweet and lovely man." 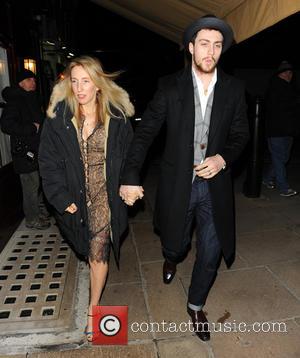