Sammy Hagar Is Celebrating After Taking Collection Of The Keys To A Custom-made $1.4 Million (Gbp875,000) Ferrari Laferrari Sportscar. 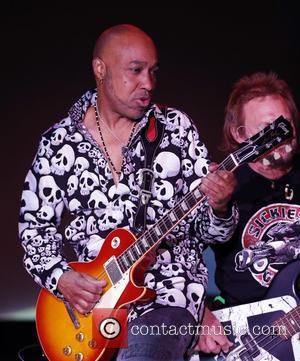 The former Van Halen rocker put an order in for the one-of-a-kind black and white car following a tour of the car company's Maranello, Italy headquarters last year (14), and is now the proud owner of one of only 499 new LaFerraris which will hit the market.

Excited Hagar says, "The car looked better than I ever imagined when I saw it. My anticipation to drive it was driving me crazy.

"When I finally took possession of the car after all the red tape involved in a special car like this, (my wife) Kari and I put 100 miles on it. And what a crazy fun 100 miles it was!

"The car is much faster than I ever imagined. It sounds like a monster of some kind. It gets way more attention than I want. I'm getting used to it slowly before I really try to push it to my limit, which is way below the car's limit.

"I feel really special getting in and out of that car. I just want to look at it sometimes. I'm very close to being speechless... I'm humbled."

The new car, Ferrari's first gasoline-electric hybrid model, has been described as "the most powerful street-legal Ferrari ever built".