The 65 year-old actor, who starred in the sci-fi franchise from 1999 until 2005, was left stunned at Ford's ankle injury: "Something went terribly awry if that happened because most times insurance companies don't like us doing those things!" 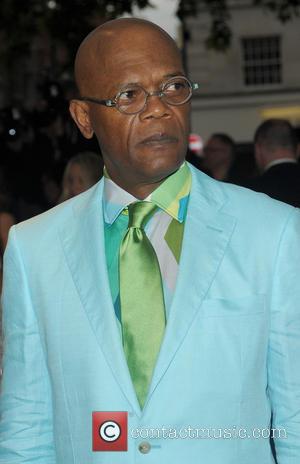 The 71 year-old's ankle broke while he was shooting in the U.K. when a spaceship fell onto his leg. Ironically it was his characters' own ship's hydraulic door, from the famed Millennium Falcon, that caused the damage.

Jackson, who appeared in the 'Star Wars' franchise as Mace Windu for the first three episodes, couldn't believe the severity of Ford's injury and insisted that it wouldn't have been his fault.

While appearing on ITV's 'Lorraine' on Monday (June 16th), the 65 year-old actor said, "I'm sure it wasn't because he wanted to or it was something he was doing."

Adding, "I'm sure something went terribly awry if that happened because most times insurance companies don't like us doing those things!"

The injury, which occurred on June 12th at the Pinewood Studios in Buckinghamshire, may side-line Ford for up to 6 to 8 weeks, which will most likely disrupt the filming schedule for director J.J. Abrams.

MORE: Harrison Ford's Son Fears Dad Will Need A Plate And Screws Fixed To His Ankle

Meanwhile, when asked about returning to play the Jedi role, Jackson admitted that he is just too busy at the moment, but he also noted that this character was killed off in 'Star Wars Episode III: Revenge of the Sith,' so could he have even returned?

Responding to a question that asked if he would be interested in joining the latest instalment, the 'Pulp Fiction' actor said, "No, not really - I thought I did and it would've been interesting but if I don't get the call, I have so many things going on that I can do and hopefully that new era of 'Star Wars' films will be as popular as the ones that we did and the ones that were done before."