Sandra Bullock and George Clooney are 'too similar'

Sandra Bullock thinks she and her good friend George Clooney are 'too similar' to date each other. 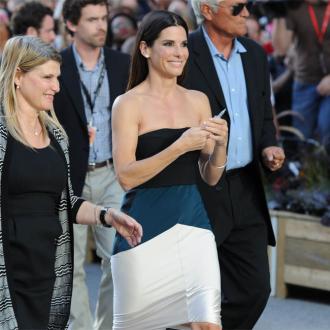 Sandra Bullock thinks she and George Clooney are ''too similar'' to have a romantic relationship.

The 49-year-old actress stars in the new movie 'Gravity' with her good pal and, although they regularly attend parties together, she insists they have never dated.

She told 'The Tonight Show with Jay Leno' on Friday (27.09.13): ''We go way back, so far back that we're now started to take years off how long it's been. We've known each other for a while . . . I think we're probably the only two that haven't dated in the business.

''I think it's probably because we're a little too similar, in all the disturbing ways.''

The Oscar-winning actress previously revealed that her son Louis, three, enjoys ''man time'' with George and their mutual friend Rande Gerber, who is married to supermodel Cindy Crawford.

She said: ''The cute little anecdote is that he went to me and said, 'Where's George and Rande?'

''And I sort of stood off to the side and waited for them to finish. Then I was allowed to take him back.''

Louis, who was adopted in 2010, has formed a close bond with George, and Sandra believes she will always come second if he has to decide between the pair.

She said: ''My son thinks he's a very cool dude. If there's a choice between me [and] George and Alfonso [Cuaron, the director], my son will leave me to be with George and these guys.