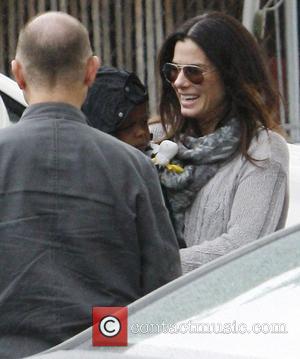 Sandra Bullock and Melissa McCarthy were snapped wandering around Disneyland on Thursday afternoon, but don't worry, the Hollywood superstars had their young children with them (well, one of them did). The Heat co-stars were joined by Bullock's son Louis and Melissa's husband Ben Falcone, reports E! Online.

Earlier this month, Sandra and Louis, 2, had a 'play date' with Melissa and her daughters Vivian, 5, and Georgette, 2, at the Bridesmaids actress' home. The pair star together in the forthcoming comedy The Heat, about an uptight FBI special agent who is paired with Boston cop Shannon Mullins in order to take down a ruthless drug lord. The problem is that neither have ever had a partner, or a friend for that matter. Director Paul Feig recently told E! Online that Sandra an Melissa "really became the best of friends" during filming, "Their chemistry was so quick and good right off the bat," he said.

Though the movie is likely to perform strongly at the box-office, Bullock will be keeping a close eye on the reception to Gravity - Alfonso Cuaron's forthcoming sci-fi thriller that will be vying for a slew of awards. Also starring George Clooney, it follows astronauts who attempt to return to earth after debris crashes into their space shuttle, leaving them drifting alone in space.