Sandra Bullock Has Dinner With Keanu

Sandra Bullock and Keanu Reeves enjoyed an ''intimate dinner'' together at Beverly Hills restaurant Craig's last night (26.10.11) but left separately to avoid being photographed together. 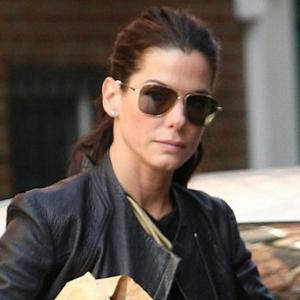 The pair ate at top eatery Craig's but left separately to avoid being photographed together.

Sandra - who was wearing black jeans, a white T-shirt and a loose-fitting black sweater rounded off with zebra-print heels - slipped out the back door, while jeans and blazer-clad Keanu left via the main entrance before driving off in a Porsche car.

The pair have been friends since co-starring in 1994 movie 'Speed'. They last appeared on screen together in 2006 movie 'The Lake House'.

Sandra was recently romantically linked to Ryan Reynolds - who she starred with in 2009 movie 'The Proposal' - but she insisted he was "just a friend".

The 47-year-old actress - who has an adopted son Louis - filed for divorce from her husband Jesse James in April 2010 after she discovered he had cheated on her with several women.

Ryan - whose ex-wife is Scarlett Johansson - is now dating actress Blake Lively, who previously had a five-month relationship with Leonardo Dicaprio.