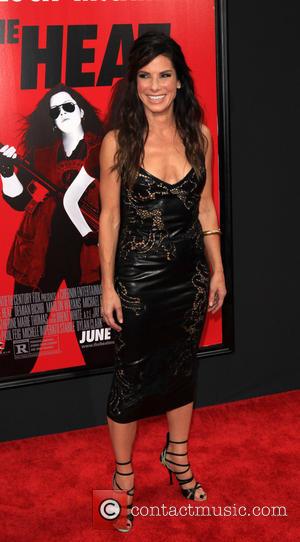 Hopefully, we’ll find Sandra Bullock more funny than her young son does, after the actress revealed that three-year-old boy, Louis doesn’t think she’s all that in the comedy department.

"He doesn't find me funny at all!" Bullock told E! when asked if her son thought she was funny at the New York City premiere of her new movie The Heat. "The only time he thinks I'm funny is when I go, ‘You know you need to go to bed.' He goes, ‘You so funny mamma. You so funny. He knows exactly what he's doing," the actress joked, assuring us that he hasn’t totally outsmarted her. "But he's hilarious. He is hysterical." Not that she minds, though: “I'm just here to change diapers and feed him and make money for school," Bullock said. "That's my purpose here and it's worth it." One person who does find her funny is her co-star in the new comedy The Heat. That’s right, perennial funny woman Melissa McCarthy thinks she’s a laugh. "They were thick as thieves almost from the start,” the film’s director, Paul Feig said. “It was almost to the point where I was like 'Hey, can I get in there?'"

The Heat is set for a strong opening weekend according to experts. "Is it really? I mean — oh, well, that’s too bad for them," Feig said with a smile. "I hope it’s a wakeup call to everyone in Hollywood that we need to put more funny ladies in movies. We’re the only studio film this summer with women in the lead roles — so let’s change that."