Sarah Harding was so upset her French bulldog Yogi was refused a pet passport to travel with her to Dublin that she forgot lyrics during Girls Aloud's Ten Tour show in Glasgow, Scotland, last weekend (09.03.13). 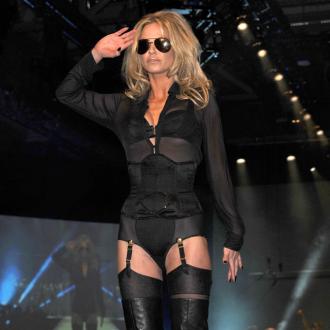 Sarah Harding forgot song lyrics during a Girls Aloud concert after her dog was refused a pet passport.

The singer was desperate for her French bulldog Yogi to join her in Dublin, Ireland, during the group's 'Ten: The Hits Tour' but the pooch was denied the necessary paperwork leaving Sarah so distraught she forgot the words to 2003 track 'Life Got Cold' while performing in Glasgow, Scotland, last weekend.

A source revealed to the Daily Mirror newspaper: ''A recent statutory change meant the paperwork wasn't approved because Yogi wouldn't be spending sufficient time in the country.

''A flunky was sent to inform Sarah of the authorities' decision and did so moments before they took the stage.

''Sarah was devastated. She was so preoccupied with thoughts of Yogi and being without him, she forgot a few lyrics. Obviously Sarah does know the words and was mortified.''

When the 31-year-old blonde beauty's solo began, she told the crowd at the SECC: ''I've forgotten the words.''

Her bandmates were quick to step in and help, with Cheryl Cole picking up the lyrics instead.

Sarah - who is also joined in the group by - Nicola Roberts, Nadine Coyle and Kimberley Walsh - was also out of sync with the dance moves.

The group's next stop on their farewell tour is Belfast's Odyssey Arena this evening (14.03.13).